(CNN)Pope Francis used a punch to make a point about the limits of free expression, but he ended up on the defensive because of it — with a Vatican spokesman saying it was “in no way intended to be interpreted as justification for the violence and terror that took place in Paris last week.”

He didn’t mention Charlie Hebdo, the satirical magazine that was targeted by terrorists after it depicted the Prophet Mohammed in cartoons, something that many Muslims find offensive. The Paris magazine became a terrorist target after publishing one such cartoon years ago, and after last week’s attack, it placed Mohammed on its cover, this time showing him crying and holding a sign with the rallying cry “Je suis Charlie,” French for “I am Charlie.” 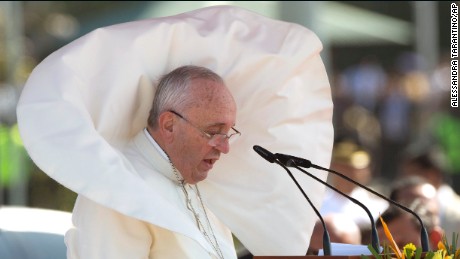 Everyone has not only the liberty, but also the obligation, “to say what he thinks to help the common good,” Francis said. However, they should not do so if it offends people.

“If Dr. Gasbarri, a great friend, says a swear word against my mother, then a punch awaits him,” Francis said. “It’s normal, it’s normal. One cannot provoke, one cannot insult other people’s faith, one cannot make fun of faith.”

While making this comment, Vatican Radio reported that the pontiff “gestured with a pretend punch” directed at Gasbarri — an action many journalists interpreted as a joke.

The Vatican later responded to a CNN question about the “punch” remark specifically.

In an email, Vatican spokesman Thomas Rosica told CNN that “the Pope’s expression is in no way intended to be interpreted” as somehow justifying last week’s violence, and he pointed out that “the Pope has spoken out clearly against the terror and violence that occurred in Paris and in other parts of the world.”

“The Pope’s words about Dr. Gasbarri were spoken colloquially and in (a) friendly, intimate manner among colleagues and friends,” Rosica said Thursday. “His response might be similar to something each of us has felt when those dearest to us are insulted or harmed.”

Rosica explained Francis’ remarks as consistent with his “free style of speech,” a plainspoken and conversational approach that has earned him admirers. Such remarks “must be taken at face value and not distorted or manipulated,” the Vatican spokesman said.

“Pope Francis has not advocated violence with his words on the flight,” the spokesman said.