JERUSALEM — Two Israeli soldiers were killed and seven wounded in a missile attack Wednesday on a military convoy in a disputed area along the Lebanese border, Israel said, in the most serious flare-up in the area in years. Hezbollah claimed responsibility.

The attack raised the risk of a further escalation between Israel and Hezbollah, the Lebanese militant group that is one of Israel’s most tenacious enemies. The two sides lobbed rockets and artillery at each other for hours afterward.

Hezbollah, which had vowed to avenge a deadly Israeli strike on its fighters earlier this month, said in a statement that its Quneitra Martyrs Brigade had carried out the missile strike at 11:35 a.m.

The attack was the latest in a string of recent events along Israel’s northern frontiers that have sharply escalated tensions between Israel and Hezbollah after a prolonged period of relative calm since the last war between them in 2006.

The Israeli military said that it had responded with combined aerial and ground strikes at what it called “Hezbollah operational positions” inLebanon, and that it might take further action.

“At these moments, the I.D.F. is responding to events in the north,” Prime Minister Benjamin Netanyahu said on Twitter, referring to the Israel Defense Forces. “We will not allow terror elements to disrupt the lives of our citizens and threaten their security. We will know how to respond with force to whoever challenges us.”

Lt. Col. Peter Lerner, a spokesman for the Israeli military, described the events as “a severe escalation on our northern border.” Military leaders convened in Tel Aviv to assess the situation.

In the early afternoon, the two sides were still firing rockets or artillery at each other, the National News Agency of Lebanon reported. Witnesses in southern Lebanon said that Israeli ordnance had landed on their side of the border, extending from Shebaa to the south. The Lebanese news channel Al Mayadeen also reported that at least eight Israeli rockets had hit southern Lebanon.

Al Manar, Hezbollah’s news channel, reported that a Spanish soldier serving in the United Nations peacekeeping force on the border was killed when Israeli shells hit Abbasiyeh, a village in southern Lebanon. Spain’s prime minister, Mariano Rajoy, confirmed on his Twitter account that a Spanish soldier in Lebanon had been killed.

Israel’s hard-line foreign minister, Avigdor Lieberman, told his Chinese counterpart during a visit to Beijing that Israel should “change its approach” and respond to the missile attack “in a very harsh and disproportionate manner,” according to a statement on Mr. Lieberman’s Facebook page.

The hostilities had been building. On Tuesday, at least two rockets fired from Syria struck the Israeli-controlled portion of the Golan Heights, without causing injury. Israel responded immediately with artillery toward the suspected launching sites in Syria, and over night it carried out airstrikes in territory under the control of the Syrian Army.

That exchange came nine days after a deadly airstrike, attributed to Israel, on a convoy in the Syrian portion of the Golan Heights. The airstrike killed five fighters from Hezbollah, including the son of the group’s slain military commander, Imad Mughniyeh, and an Iranian general. Israeli military commentators said that Hezbollah and its Iranian patron had been building an infrastructure in the Syrian Golan Heights with which to attack Israel.

Hezbollah, which fought a monthlong war against Israel in 2006, is now fighting in Syria on the side of President Bashar al-Assad’s government.

Since that strike, the Israeli Army has been on high alert in expectation of a revenge attack. A top Iranian commander had warned Israel to prepare for a “shattering thunderbolt.”

Israeli military analysts had predicted that Hezbollah would exact revenge by targeting Israeli soldiers, but that it would avoid directing attacks at Israeli civilians to reduce the likelihood of a full-scale war.

Still, several retired Israeli military generals said that Wednesday’s exchange was more serious than previous ones, and that it might be difficult to avoid further escalation.

“The tension in the north, it’s a very tricky and I would say flammable situation,” Israel Ziv, a reserve major general who once led the army’s operations directorate, said in a call with international journalists. “It’s very clear that, very easily from events and retaliation, we will find ourselves in a war that does not belong to Israel.”

Kobi Marom, a former commander in the north who lives in the Golan Heights, said that both Israel and Hezbollah wanted to avoid another war, but that it might be impossible.

“This serious incident with casualties calls for a response,” Mr. Marom said on Israel Radio. “Even if both sides don’t want it, we could deteriorate to a very difficult reality.”

The escalation is taking place against the background of an election campaign in Israel. Mr. Netanyahu, who is viewed by many Israelis as having strong security credentials, is competing for a fourth term in office.

Wednesday’s attack took place in the Shebaa Farms, an area known as Mount Dov in Israel. Lebanon considers it occupied by Israel, and Syria also claims it. Israel captured the area, along with the adjacent Golan Heights, in the 1967 war and later annexed both regions in a move not recognized by the United Nations.

The remains of the captured soldiers were returned to Israel in a prisoner exchange in 2008. Israeli officials concluded that both soldiers had been badly wounded in the initial ambush and had probably not survived.

Shortly before the assault on Wednesday, a Hezbollah fighter in the Bekaa Valley of Lebanon said by telephone that residents were storing food, fearing an Israeli attack. 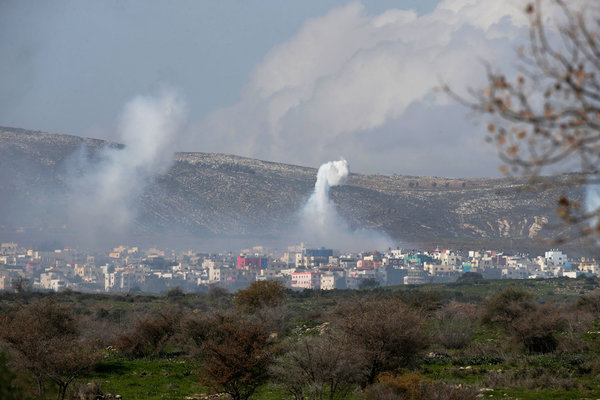 Shells fired from Israel landed near the village of Ghajar in southern Lebanon on Wednesday. CreditBaz Ratner/Reuters

Hezbollah had raised expectations that it would respond to the Israeli attack on the convoy in southern Syria last week. Hezbollah and Iran have provided crucial support to Mr. Assad during the four-year insurgency in Syria, and Hezbollah has provided forces to fight alongside Syrian troops. This represents a major expansion of the group’s mission, beyond its core goal of confronting Israel.

Hezbollah, the Shiite paramilitary group that is Lebanon’s most powerful fighting force and political party, had several motivations in responding: It is eager to prove that the Syria battle has not detracted from its ability to check Israel on the southern border; and its loyalists have demanded revenge for the death of a popular fighter, Jihad Mughniyeh, the son of a prominent commander assassinated in 2008.

Hezbollah’s deputy leader, Naim Qassem, declared that the attack was an Israeli attempt to impose “a new equation” on the conflict in Syria, one that could not go unanswered. He also called it proof of what Hezbollah has long contended, that Israel is supporting insurgents in Syria to weaken that country, a longtime enemy.

The group could also be under pressure from Iran, which provides the bulk of its weapons, to avenge the death of the Iranian general.

Analysts had predicted that Hezbollah would try to keep its response proportional, to avoid a repeat of the 2006 war with Israel that devastated much of south Beirut and southern Lebanon. Neither Israel nor Hezbollah wants a new war, analysts say, as each faces security threats elsewhere.

Yet both sides feel pressure to respond, and what one party considers proportional may be seen by the other as a brazen provocation, creating the risk of inadvertent escalation.

The challenges for Lebanon are substantial, and many Lebanese commentators critical of Hezbollah were quick to denounce the party’s decision to strike from Lebanon — potentially making the country a target — rather than from its new footholds inside Syria. Lebanon is already home to more than one million Syrian refugees, and a major Israeli operation targeting southern Lebanon would add another internal-displacement crisis on top of that one.

The country also faces instability in the north, from Syria-based insurgents who have tried to expand their foothold in Lebanese border territory, recently killing eight Lebanese soldiers. And because of political deadlock, in part linked to the deep divisions in Lebanon over the Syrian war, the country has been without a president for eight months.

Beyond that, in the event of a major escalation and serious damage, Iran, which has proved billions of dollars in financial support to Syria during the war there, according to United Nations officials briefed on the matter, may not be flush enough to provide as quick and lavish of a reconstruction as the one it engineered after the 2006 war