Japan: ‘We will never, never forgive’ ISIS for apparent beheading

(CNN)He ventured to Syria to tell the stories of lives torn apart by war.

But in doing so, Japanese journalist Kenji Goto suffered his own gruesome fate — apparently becoming the latest foreigner to be decapitated by ISIS.

A newly distributed video from ISIS appears to show the beheaded body of Goto. It came one week after a video surfaced showing him holding a photo of what appeared to be the corpse of his fellow Japanese captive, Haruna Yukawa.

And now, Japan finds itself more deeply embroiled in the global fight against ISIS.

«We are deeply saddened by this despicable and horrendous act of terrorism, and we denounce it in the strongest terms,» Japanese Prime Minister Shinzo Abe said, according to broadcaster NHK. «To the terrorists, we will never, never forgive them for this act.» 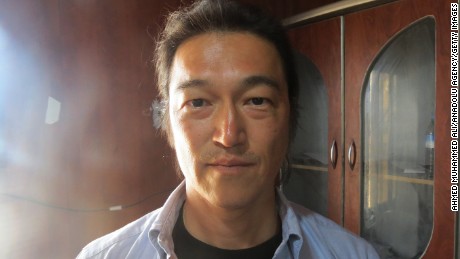 The members of the United Nations Security Council said in a statement that they strongly condemned Goto’s «heinous and cowardly murder,» adding that those responsible should be held accountable.

«This crime is, yet again, a tragic reminder of the increasing dangers journalists and others face every day in Syria. It also once again demonstrates the brutality of (ISIS), which is responsible for thousands of abuses against the Syrian and Iraqi people,» the Security Council said.

«We applaud Japan’s steadfast commitment to advancing peace and prosperity in the Middle East and globally, including its generous assistance for innocent people affected by the conflicts in the region,» Obama said in a statement.

Unlike the United States, Britain and other allies, Japan is not involved in the military campaign against ISIS. But Japan has been providing humanitarian aid in the Middle East as ISIS continues its bloody quest to solidify an Islamic state across parts of Iraq and Syria.

«We would like to expand our support for refugees,» Chief Cabinet Secretary Yoshihide Suga said. «We are surely going to have necessary support in terms of not yielding to terrorism.»

‘Let the nightmare for Japan begin’

The ISIS video opens with a black slate that reads, «A Message to Japan.» It then shows a kneeling Goto . The man known as «Jihadi John» is standing behind him.

The terrorist speaks in English while holding a knife in his left hand.

«Abe, because of your reckless decision to take part in an unwinnable war, this knife will not only slaughter Kenji, but will also carry on and cause carnage wherever your people are found,» the man says. «So let the nightmare for Japan begin.»

The video cuts to black as the militant puts the knife to Goto’s throat. It then shows the apparent result of the decapitation. It’s not clear who conducted the apparent killing.

The knife-wielding masked man with a London accent has been nicknamed «Jihadi John.» He has appeared in at least six videos with hostages and has overseen the beheadings of other captives.

The race to save Goto’s life

On January 20, an ISIS video posted to social media showed Goto and Yukawa dressed in orange, kneeling in front of a masked man dressed in black.

In that video, the ISIS militant issued a $200 million ransom demand to the Japanese government in order to free the Japanese men within 72 hours. That’s the same amount of money Abe recently pledged for those «contending» with ISIS.

Days later, a new message surfaced featuring what appeared to be the corpse of Yukawa. And Goto would also be killed, the new message claimed, unless Jordan freed prisoner and convicted terrorist Sajida al-Rishawi.

Suga said Japan tried hard to save both Yukawa and Goto.

«Since the beginning of the incident, we have been trying to use all kind of means and to do our best to save their lives by using our diplomatic route, as much as possible,» Suga said Sunday.

When asked whether Japan negotiated over the ransom, Suga said no.

Jordan also said it did everything it could to free Goto in cooperation with Japan, government spokesman Mohammed Al-Momani told Jordan’s official Petra news agency Sunday.

But that country is still grappling with its own hostage situation.

Among its web of threats, ISIS said it would kill Jordanian military pilot captured in Syria if Jordan doesn’t release convicted terrorist al-Rishawi.

But pilot Muath al-Kaseasbeh’s fate remains unclear. He was not mentioned in the latest video featuring Goto.

Jordan will continue trying to secure the release of the pilot, Al-Momani told Petra on Sunday. But he said officials are still seeking «proof of life» evidence that al-Kaseasbeh is alive.

Goto, a veteran journalist, had said he felt compelled to document the stories of war, even if it meant going to some of the most dangerous places in the world.

«Syrian people (have been) suffering for three years and a half. It’s enough,» he said in a video shot in October. «So I would like to get the story of what ISIS wants to do.»

In a statement posted on the website of Goto’s media company, his family thanked those who had «prayed for his safe return» and said they were «deeply saddened» by his death.

«I’m shedding tears of sorrow, I just can’t think of any words to say,» she said, according to NHK. «But I don’t want this sorrow to create a chain of hatred.»

Rinko praised her husband’s work in a statement released Sunday.

«While feeling a great personal loss, I remain extremely proud of my husband, who reported the plight of people in conflict areas like Iraq, Somalia and Syria,» she said. «It was his passion to highlight the effects on ordinary people, especially through the eyes of children, and to inform the rest of us of the tragedies of war.»

But now, she must raise the couple’s two girls without their father.

The 2-year-old daughter has been asking when her dad will come home.